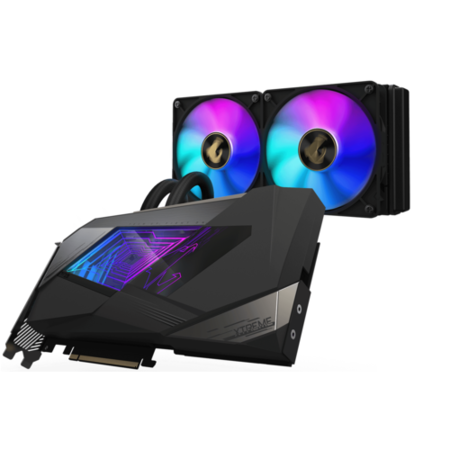 Prepare yourself for an unforgettable gaming experience with the Gigabyte AORUS RTX 3080 Xtreme WaterForce GPU, powered by the all-new Flagship NVIDIA GeForce Ampere architecture boasting 2nd Generation RT cores and 3rd Generation Tensor Cores to bring you the biggest graphical performance leap of the modern era. The RTX 3080 Xtreme Waterforce features a jaw dropping 10GB of GDDR6X memory, the intuitve Waterforce cooling system including a 240mm radiator and 2x 120mm ARGB fans as well as a protective metal backplate that not only enhances the aesthetics of the card but also enhances the structure to provide full protective coverage and with support for RGB Fusion 2.0 you have access to 16.7M customisable colour options and numerous lighting effects, you can choose lighting effects or synchronise with other AORUS devices. Welcome to the future of gaming with GeForce 3080.

As the 3080 Xtreme WaterForce comes with a pre-assembled water-pipe and pump, the GPU can be easily installed without any concerns about leakage.

NVIDIA DLSS is groundbreaking AI rendering that boosts frame rates with uncompromised image quality using the dedicated AI processing Tensor Cores on GeForce RTX. This gives you the performance headroom to crank up settings and resolutions for an incredible visual experience. The AI revolution has arrived to gaming.

UP YOUR CREATIVE GAME

Take your creative projects to a new level with GeForce RTX 30 Series GPUs. Delivering AI-acceleration in top creative apps. Backed by the NVIDIA Studio platform of dedicated drivers and exclusive tools. And built to perform in record time. Whether you’re rendering complex 3D scenes, editing 8K video, or livestreaming with the best encoding and image quality, GeForce RTX GPUs give you the performance to create your best.

Live streamers can now level up their game even further with the new NVIDIA Broadcast app. It upgrades any room into a home broadcast studio by transforming standard webcams and microphones into smart devices through the power of AI. The Broadcast app offers three AI-powered features which are: Noise Removal, Virtual Background and Auto frame so the focus always remains on you.

DirectX Raytracing allows games to simulate how light works in real life, providing incredibly realistic and beautiful graphics effects like global illumination, reflections, and shadows. NVIDIA has partnered closely with Microsoft to enable full DXR support on GeForce GPUs. GeForce RTX GPUs were designed from the start for the extreme demands of ray-tracing workloads. Specialised RT cores, found only on GeForce RTX graphics cards, provide billions of rays per second of performance, and up to 3X the frame rates with DXR games and applications. This makes ray tracing at real-time frame rates possible for the first time.