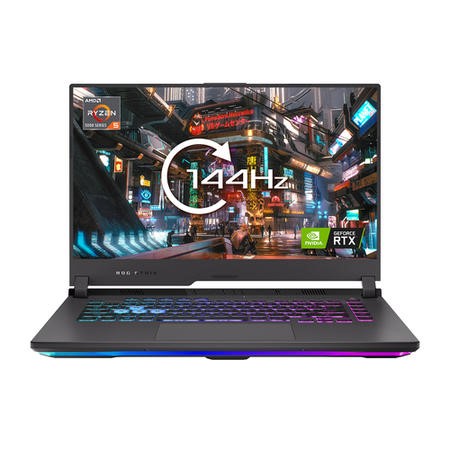 Raise your game. Play with style

Focused firepower streamlines and elevates the core Windows 10 gaming experience in the ROG Strix G15. With a powerful AMD Ryzen™ 5 5600H CPU and GeForce RTX™ 3050Ti GPU, everything from gaming to multitasking is fast and fluid. Go full-throttle with a competition-grade display at 144Hz. Adaptive-Sync makes gameplay ultrasmooth, while advanced thermal upgrades help you stay cool under pressure. No matter what your game is, you can achieve your perfect play.

The latest processors team up to take down gaming, multitasking, and more. NVIDIA graphics GeForce RTX™ 3050Ti GPU deliver smooth frame rates, while an AMD Ryzen™ 5 5600H CPU powers through heavy lifting. Armed with 16GB of high-performance RAM, you can game, stream, and switch gears seamlessly. 512GB of NVMe SSD storage accelerates load times for games and apps, and a second M.2 slot lets you add another drive to expand your collection.

Go for a 144Hz gaming panel that offers tournament-level speed. Deepen immersion with Adaptive-Sync technology that eliminates screen tearing and minimizes stuttering. Super-narrow bezels frame your view, minimizing distractions to keep you locked in the scene.

Keep a low profile with quieter, more effective cooling. Liquid metal thermal compound pulls more heat away from the CPU. Arc Flow fans spin 84 blades each with a new design that pushes more air with less turbulence. Air flows through up to 4 heatsinks and fan outlets to rapidly expel heat. These and other improvements allow ROG Boost to overclock the GPU in Turbo mode, and they open up extra thermal headroom to pursue even higher GPU clocks and also overclock the CPU.

Unplug and do more on the move with a high-capacity 56Wh battery. Extend your battery life away from wall sockets with Type-C charging from compatible power packs. For everyday activities like web browsing and streaming video, you can work off a smaller USB-C adapter up to 100W and travel even lighter with a single charger for your laptop and phone.

Twin Smart Amp* speakers fire sound directly at you to maximize clarity. Put on headphones to experience virtual 5.1.2-channel surround sound powered by Dolby Atmos, and be at the center of the action. Two-Way AI Noise-Cancelation removes unwanted noise from incoming and outgoing audio, making your team chat, streaming, and other communications crystal clear.

Game at gigabit speeds on compatible connections with Intel® Wi-Fi 6 with Gig+ (802.11ax). It boosts peak interface bandwidth, increases efficiency and reliability on crowded networks, and offers lower latency for less lag in-game. ROG RangeBoost enhances reception by evaluating the signal strength of four internal antennas and then picking the best pair to use for your location, minimizing dead spots and increasing range by up to 30%. For even low-latency multiplayer gaming, a built-in Integrated Gigabit Ethernet port complements your built-in Wi-Fi.

Unlimited access to over 100 high-quality PC games on Windows 10. One month subscription to Game Pass that’s included with the purchase of your device. With games added all the time, you’ll always have something new to play.