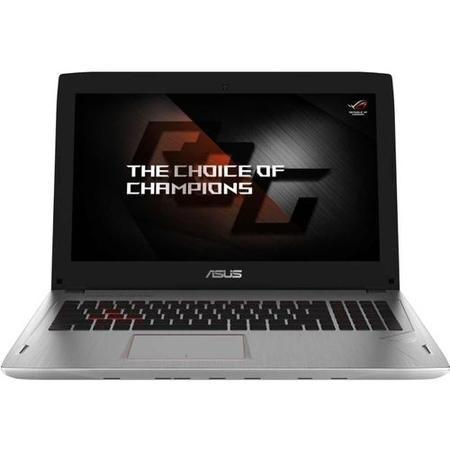 With a profile measuring just 24.7mm and tipping the scales at a lightweight 2.7kg, ROG Strix GL702 has an ultra-portable. design that fits snugly in a messenger bag or backpack. Whether you're waiting for your flight, kicking back at a café, or at a LAN tournament, you can game just about anywhere!

ROG Strix GL702's display comes with a slimmed down bezel, measuring just 17mm on the top and 13mm on the sides, for a more pleasant and discreet viewing experience.

HALF THE SIZE, JUST AS COOL

ROG Strix GL702 is engineered to offer all the thermal performance you need in a much slimmer body than conventional gaming laptops. In fact, the additional boost fan is as thin as a traditional USB connector.

Anti-ghosting keys ensure your commands are instantaneously and correctly interpreted – even if you hit up to 30 keys simultaneously.

A KEYBOARD DESIGNED FOR GAMING

Our tactile gaming keyboard also features ASUS-exclusive Overstroke technology, a stylish red backlight, specially designed WASD keys, and a deep 1.6mm travel distance. Our engineering team meticulously tests our keyboards for ultimate durability and reliability resulting in an expected lifetime of 10 million key presses. ROG Strix GL702will arm you with a keyboard that you can trust.

Onboard Intel® Thunderbolt™ 3 technology enables a total of up to 40Gbps bandwidth for data and display-signal streams, combined. ROG Strix GL702 gives you both Intel Thunderbolt and USB 3.1 Type-C for increased compatibility with your various devices.

NVMe PCIe x4 SSD gives you superfast data access speeds so you spend less time waiting. ROG Strix GL702 boots up faster, loads apps quicker, and gives you shorter in-game loading times so you stay immersed and focused on the game. Don't stop at a blazing fast SSD, equip your ROG Strix GL702 with up to a SATA 1TB 2.5' HDD for an abundance of storage space.

FILTER OUT ALL AMBIENT NOISE

The array microphones are designed to filter out ambient noise, which means that even if you're at a LAN party or in another loud environment, your voice will come through loud and clear.